It all began with billiards. Or, more accurately it all started with a game called carom billiards whose origins can be traced back to late eighteenth-century France. The game known simply as billiards, as its progenitor’s influence expanded, swiftly developed as a variant of carom billiards when the latter became popular with British Army officers during the reign of Queen Victoria.

Billiards eventually gave birth to a number of different offspring, most notably pool and snooker, both of which would surpass the fame of their often ignored ancestor. Their shared origins mean that of all of the aforementioned games have a similar rule-set, a somewhat communal look and feel and are all played on a table with players using cues in order to pot, or sink, balls in a number of, depending on the game, pockets or holes.

Bumper pool, as its name suggests, is a descendent of pool and utilizes a parallel style of, if slightly smaller, table. That, however, is where the game’s similarities end. While both are played by two players using pool cues to attempt to gain an advantage, and ultimately victory, over their opponent by pocketing, or potting, the greatest number of balls, it’s here that the rules and the way in which the games are played, diverge. While both, pool and bumper pool, are popular bar games, it’s the lesser-known version of the billiards derivatives that is gaining ground and finding a new fanbase, with millennials and hipsters.

Using a series of cushioned bumpers and a smaller table with just two pockets, bumper pool is played with ten balls, five red and five white, that each player has to try to pot in his or her opponents’ pockets while avoiding, and using, the bumpers to aid their shots and increase their chance of winning.

The surge in bumper pools’ fashionable appeal has led to it becoming a fixture in “man-caves” and dens everywhere. And as it doesn’t look like it’s going to go away anytime soon, we thought it was about time we took a look at some of the best bumper pool tables, so that when you’re ready to take one home, you’ll know exactly which one is right for you.

And, without further ado, here they are, our five favorite bumper pool tables… 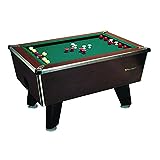 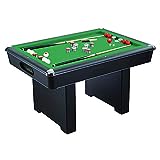 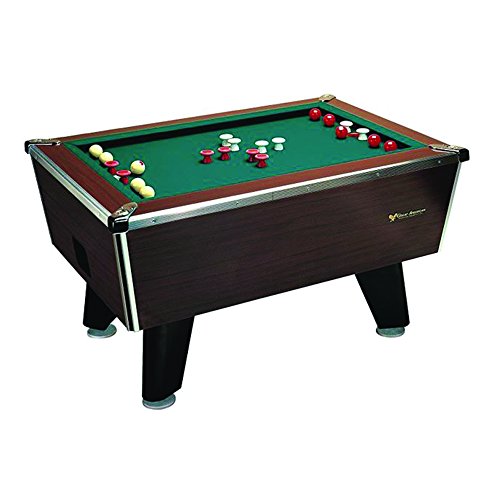 Bring the bar into your home with this commercial model bumper pool table. Made to sit in the middle of local beer halls across the nation, this Great American model is robust, sturdy, and built to outlast multiple generations of fans.

This regulation-size bumper pool table is fashioned from a singular piece of machined slate which ensures that play is smooth, fast and that the balls always end up where you want them to. Providing, that is, that you possess the necessary skill to put said balls where you want them to be.

You can even choose the color of cloth that you want to cover the slate in order to finish off this long-wearing cabinet grade table. Built by master craftsmen to help you become a master of the game, this table is tougher than the combined clientele of all of the bars that it would usually call home. 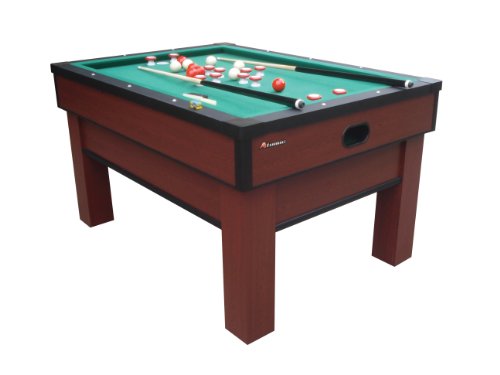 Classic by name, classic by nature. A slightly smaller than regulation size table, the Atomic Classic’s playing surface is made from hard-wearing MDF which means that play should remain smooth and consistent for the lifetime of the table.

Clocking in at five feet in length, the Atomic Classic makes the most out of every inch of space that it takes up. It’s square, strong legs and construction lend it a near-perfect balance that allows balls to roll true, and on target, every single time they’re struck by a cue.

The Atomic Classic’s internal return system sends the balls straight back to the player. You pot them, you get them back without having to retrieve them yourself. Which means that you set them up and get right back to playing. It really is that easy with the Atomic Classic. 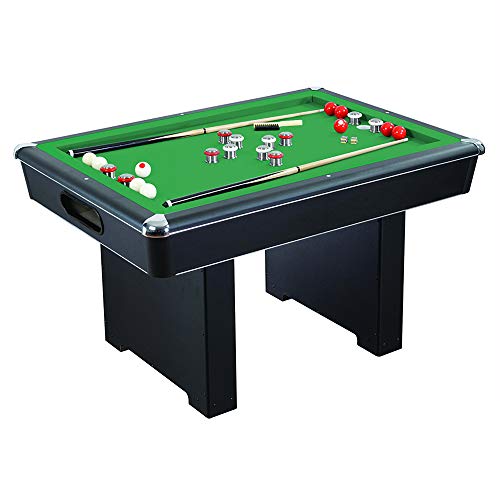 Slightly smaller again, the Hathaway Renegade might seem like you’re downsizing from the Atomic Classic, but who’s really going to notice six inches? Four a half foot is more than long enough to pack in a whole lot of bumper pool action. If space is at a premium in your den, you’ll be glad it isn’t as big as its rivals.

The Renegade is also the best looking of the tables on the list so far - it’s a little more swish and elegant than the Atomic Classic and the Great American, and with a solid slate playfield delivers the same kind of performance as the latter for a lot less money.

With independent leg levelers, an internal ball return system, and durable wooden construction, the Renegade is able to easily handle whatever trials and tribulations life, the modern family, or the about town bachelor throw at it while they’re engaged in a bumper pool marathon. 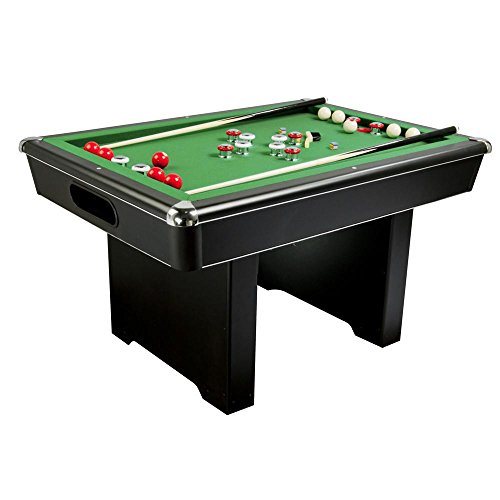 We know, it’s confusing, isn’t it? This Carmelli bumper pool table is also called the Renegade and shares a lot of the same specifications as the Hathway model. In fact, if you didn’t take the time to look a little more closely at both tables, you’d swear they were one and the same. But they’re not.  They’re really not.

Yes, they’re exactly the same size. Yes, they both have slate topped table surfaces, which as we’ve already mentioned, every pool table worth its salt should have. Yes, it comes with everything that you need to play bumper pool - table, bumpers, cues, and balls, just like the Hathaway does. The Carmelli and the Hathaway are like identical twins that were separated at birth. Except that they’re not.

While there’s very little to separate them play and price-wise, the Hathaway features adjustable leg levelers, whereas the Carmelli has a solid base and chrome finished corner posts and bumpers. The Carmelli and the Hathway are the bumper pool table sisters from different misters and brothers from another mother. 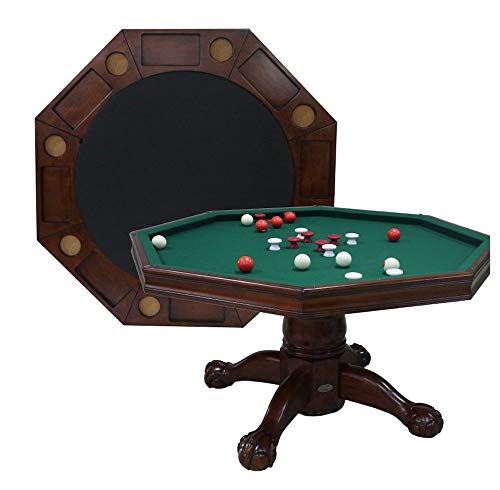 If you’ve ever wondered how the other half live and want to experience it for yourself, then look no further than this Berner Billiards bumper pool table. A three in one poker, bumper pool, and dining table, the Berner is the perfect bachelor accessory and must-have item for any “man-cave”.

Built from solid wood and featuring a leather topped table with in-laid drink holders and retractable leather bumper pool pockets, this is the gentleman’s answer to the bumper pool table question.

Surprisingly, it also comes with everything that you need to enjoy an evening filled with bumper pool. And poker.

What is Bumper Pool?

Best described as a combination of pool and pinball, bumper pool is played on a smaller version of a pool table. Unlike pool though, bumper pool can be played on both rectangular and octagonal tables.

Taking its name from a series of “bumpers” or obstacles that are fixed on the surface of the table, the objective of bumper pool is the same as regular pool.  Sink all of your balls in the tables pockets before your opponent does.

Played with ten (five white and five red) balls, instead of fifteen, each player begins with his or her marked ball and attempts to sink it in one of the two pockets located at opposite ends, or sides, of the table. The bumpers are used to “bump” balls off during play.

The first player to successfully pocket all of his or her balls is the victor. While it sounds relatively easy, and straight forward, bumper pool demands a level of skill and precision that regular pool doesn’t and can be as frustrating as it is rewarding.

A game that thrives on the dedication of its players, bumper pool takes a lifetime to master but also provides endless evenings of entertainment and enjoyment

I’m In. Which Bumper Pool Table Is The Right One For Me?

Now that you’ve decided that bumper pool is the game that you’ve spent half of your life looking for and you’re committed to finding the right table to hone your hustling skills and trick shots on, all you need to do is find out which table is going to suit you best.

In order to narrow the list down, you need to answer two simple questions. Do you have space for a full-size table or are you looking for a non-regulation, smaller bumper pool table? And what’s your budget? Is the sky the limit or do you to guard your purse strings? Once you’ve answered both of those questions, take a look at the list again. We guarantee that the right bumper pool table for you is on there.

So take another look at the list. And go and find your perfect bumper pool table…