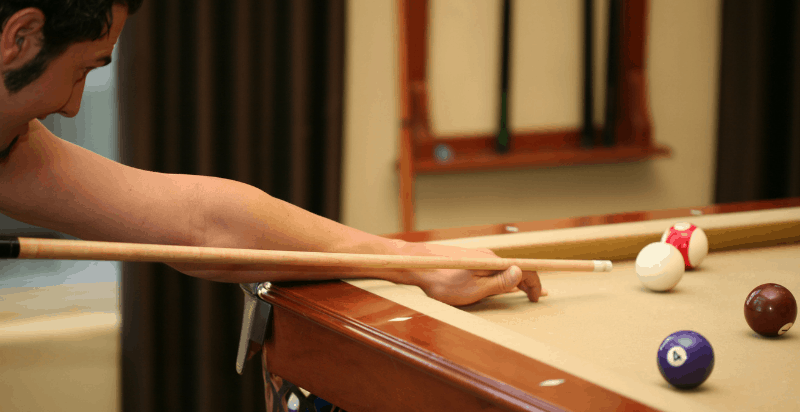 Friends have a funny way of being busy, many miles away, at the precise moment you’re itching for a game of pool, so it’s good to have some ideas for solo games when you’re faced with an available table but no partner in crime. Or perhaps you have an upcoming games night with a worthy adversary and you want to use the interim time to boost your A-game.

Playing alone gives you the opportunity to focus on your stroke, accuracy and power. But how do you keep this practice session fun? In this article, we’ve suggested a few games and tips to change up the environment and pace of your game to keep solo practice feeling fresh. All can be played on your own table or at a pay-per-hour hall.

Most can be played on a pay-per-game table in a bar or gaming area.

Solo versions of the basics

Set up the table as you usually would for a game of 8-ball. Break, and then play both stripes and solids in turn, obeying all the usual rules. If you’re feeling a little rusty, you could bypass the opening restriction of hitting all four cushions on the first break.

It is entirely down to your mood and patience levels as to whether you award each ‘side’ ball-in-hand penalties for fouls.

However, when you’re lost in technique, and you have no one around to keep track of whether you’ve just hit a stripe or solid, it’s easy to lose track of which ‘side’ you’re playing. Why focus on procedure, though?

To keep up the fun momentum of hearing that click-clunk, perhaps decide that you’re going to sink all the solids first, then the stripes. And then resolve to choose the least convenient pocket for the 8-ball.

Do a super-fierce break, scattering the balls as far as possible, and then seek out ball 15. Pot them as steadily as you can from 15 downward. Allow yourself one ‘fault’ on each ball. If it takes more than two shots to sink your ball, then you need to start over.

Look Your Weaknesses in the Eye

Honestly, compiling a list of shots you’re not so hot at doesn’t sound like a very encouraging activity, but it’s good to know which parts of your game need work. Perhaps you dread being faced with a nearly 90° right-side impact against a ball which needs to dribble ten inches along the cushion before reaching the pocket.

Perhaps you seriously dislike it when the cue ball is right up by your belt line and you have to point the end of the cue right up into the sky to make the angle.

Set up the easiest version of the shot you find difficult and gradually increase the challenge level as you grow in confidence.

One word of warning: it’s best to play this in the comfort of your own home or in a hall where you can hire the table by the hour. If you make a start on this kind of game while waiting for a pal at a bowling alley or bar, the chances are that they will show up just when you’re getting good at it.

Also, you’ll leave yourself open to the many helpful comments of passers-by, who can be relied upon to give you the full benefit of their advice.

You can do this quite efficiently by racing the clock. Either:

Put your smartphone into countdown mode to see how many balls you can sink in three minutes, or set a timer and stop it when you have sunk all seven stripe or solid object balls.

Keep count of any fluffs or fouls and add those to your final time as seconds. Aim to beat that score with as few fouls, miscues etc as possible.

The Joy of Beating Records: Be Your Own Friendly Neighborhood Nemesis

For some, the idea of keeping track of numbers is like taking work into leisure time. That’s absolutely fine; in which case, skip on to the next items in this list of ways to play pool by yourself.

However, if you revel in recording performance and tracking personal bests (perhaps even in a spreadsheet!) then Fargo might appeal to you as a game.

Fargo is played in ten frames or “innings.” You set up as per any usual game of 8-ball and then break, but without any fouling restrictions on the success of that break. In other words, it doesn’t matter if you miss a cushion, or pot the white or 8-ball by accident.

You then work the table with cue ball in hand, calling which object ball is going in which pocket. There are two phases for each innings (random and rotation) which have their own rules, difficulty level and point-scoring system. You can get more details from this video, here.

Your Fargo rate is your score at the end of 10 innings. You can compete against yourself, keep up with how your local league is doing, or check in on the best players in the world by following FargoRate.com. FargoRate also has its own app, available on both iOS and android.

Okay, so those are a few activities you can try out anywhere you have access to a table where you’re not paying per play.

At home, you can be more freely inventive about your methods of raising your skill levels. After all, at its heart, pool is a competitive game. For an advanced player, competing with yourself or an imaginary friend can seem a little stale occasionally. Thankfully there are a number of ways you can shake things up and motivate yourself to push your boundaries.

Being able to line up on both sides can significantly broaden your shot options throughout a competitive game. It also develops powerful hand-eye coordination skills for other parts of your life. Best of all, it takes many, many hours of practice.

At first, play every other frame on the “wrong” side to give your muscle memory a chance to develop. When you’re growing a little more confident, then perhaps alternate left/right shots throughout a frame. This is a little more challenging because your brain is forced to switch ocular focus quickly. After a few months of solo practice, impossible angles will become your friends.

But race it in style, right?. Is there a TV in your pool room? Between each commercial break, work on clearing all solids/stripes or a whole frame, depending on your skill level.

How many off-the-cushion drills can you complete between turning the kettle on and it reaching boiling point?

Pick a seriously long song. Double the point value on each ball and see how many you can sink before the song ends. By the way, when we say “long,” we mean 6 minutes plus. So, fill a track list with the likes of Bohemian Rhapsody, Comfortably Numb, All Along the Watchtower, Born Slippy, etc. and watch yourself get faster with a groovy beat in the background.

A self-decided penalty/reward system is a cool way to encourage you to work on a skill in a set practicing time. Let’s say that spinning the cue ball (doing an ‘English’) is not your area of genius.

Decide on a treat for yourself if you manage to chase 10 object balls into the pockets without the cue ball following them in. Some solo players take the reward system to heart and go as far as transferring cash to a Stripe account to save up for bigger treats.

If you lose your temper, walk off early or find yourself shortening your practice time, devise a small and unimportant “penalty”.

Bear in mind that the purpose of this exercise is to reward stamina, patience and discipline rather than to reward results.

Calm, This One Is

The coolest thing about Yoda is that he looks like the world’s least likely tough guy because he’s so quiet and composed. Training yourself to be oblivious to noise pollution, distraction (and mind games) isn’t just fun—it can raise your tournament performance a notch or two. As a major bonus, your own unflappable serenity is a pretty good psych-out weapon in its own right.

There’s something particularly rewarding about being able to pop a difficult shot away, smooth as silk, in conditions where it’s really hard for other players to concentrate.

Spend time setting up a chaotic atmosphere of your own to challenge your sense of focus. It’s worth checking out sound effect libraries (heckling, commentating and ball-clinks at irregular intervals), or building a playlist of truly terrible music.

You can also practice playing under differing lighting conditions for short periods of time. And by “short” we mean the time it takes you to play one frame, tops.

You can of course buy gadgets which help you push the envelope with your skill level. For example, you can practice developing the perfect spin by using a training cue ball.

You can practice the art of varying the power in your shot by using pocket reducers, which will ping ordinarily accurate shots back onto the table if you haven’t quite hit the right stroke speed. Being able to judge perfect strength with accuracy is something of an art form. Learning that skill can be joyfully time-consuming solo activity.

Finally, make the best of your alone time with your own pool table by unleashing your inner child. Legends tell of fathers who have “borrowed” a few track strips from their kids’ Hot Wheels kits to create elaborate obstacle courses and somehow lived to tell the tale.