Do you want to get better at ping pong and really advance your game? If you're ready to take the leap from occasional "fun" games to really amping up your skills, then an advanced ping pong robot can be a fairly inexpensive way to help your skills get to the next level.

Table tennis, or ping pong, like it’s more illustrious, much larger, and renowned cousin tennis, is a multiplayer game. Whether you’re playing singles or doubles, it’s always been an inescapable fact that you need other players to...well, play with.

Ping pong has never really lent itself, barring the infamous scene in the eponymously titled film in which Forrest Gump takes on a folded table, to a solitary player option. It has always been an incredibly fast game contested by two, or four, players that pushes the stamina and skill of all of it’s participants to the limit of their ability.

You play against each other and you practice together, that’s the nature of table tennis and you can’t defy the laws of nature. Or can you?

While technology has freed us from many of life’s more mundane everyday tasks, it has also provided us with solutions to the problems that plague our leisure time. In the case of ping pong, it was a machine that provided the answer to a question that players had been asking themselves ever since it first emerged at the tail end of the nineteenth century - namely “How can I train by myself?

How can I get better without giving the secrets of my game away?” The machine in question is called a ping pong, or table tennis, robot. A ping pong robot is primarily designed to vary the frequency, angle, and speed of the balls that it fires at a player in order to increase their ability by forcing them to develop the skills needed to face different opponents.

Put simply, it’s a robot that helps to equip a player with the expertise that he or she will need to defeat any challenger.  And, even accounting for table tennis’s rapidly growing popularity,  for such an ostensibly niche market there are a wide number of options available to anyone who dreams about ping glory and success.

However, that doesn’t mean that all of them are up to the task of helping to train potential future table tennis champions. With that very real concern in mind, we decided to take a look at five of the best robots in order to help you choose the right robot to fulfill your ping pong potential and realize your ambitions. Pick up your paddle and prepare to face the very best in robotic tennis technology… 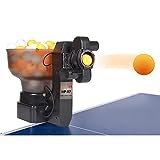 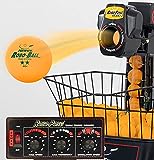 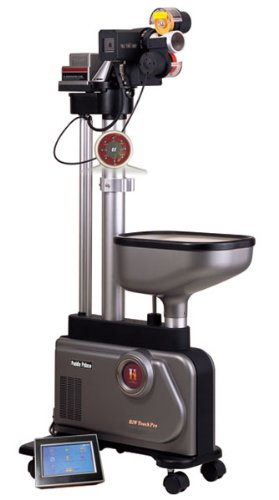 The choice of table tennis champions the world over, the H2W Touch Pro is widely acknowledged as being one of the best ping pong robots available and demand for it is such that almost as soon as it hits the shelf of any store, it sells out. If you want to be the best player, you need the best robot. And that robot is the H2W.

Controlled via a simple touchpad interface, the H2W is easy to program and tailor to your exact training specifications and requirements. Whatever you need on the ping pong table, this robot can, and will, do it.

With a vast array of speed and spin choices and the ability to target any spot on a table, the H2W will hammer your game into shape by allowing you to concentrate on the better elements of your game while ridding yourself of the bad habits that hold and have held, you back.

As easy to set up as it is to program, the H2W is built to aid you on every step of your journey toward ping pong perfection. 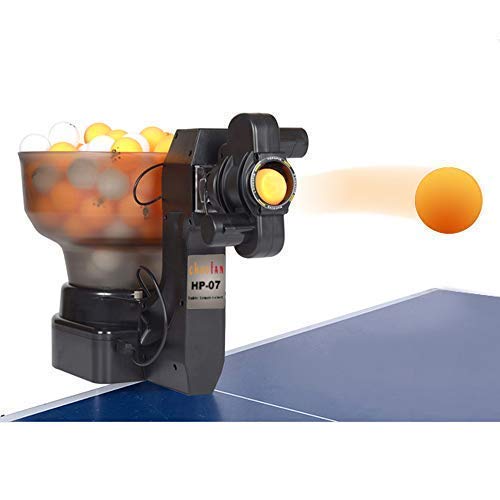 Slightly more comfortable (okay, you got us, it’s a LOT more comfortable) on your pocketbook than the H2W is the much more affordable Chaofan 36. A large ball capacity (one hundred and ten when full) and easy to set up and use robot, the Chaofan 36 might seem like a step down from the H2W, but its price puts it firmly within the reach of everyone.

Fully adjustable, the Chaofan 36’’s wired controller allows you to control the speed, frequency, and angle of its delivery, making it a much in demand training machine whatever the level of your ability.

Having received wide-spread praise across the board, it’s fairly safe to assume that amateurs and professionals alike seem to have fallen for the Chaofan and fallen hard. It might not be draped in the same digital refinery as the H2W, but it does just about everything that the all-singing and all-dancing H2W does. And it does all of it at more than a thousand dollars less than it’s more technologically advanced competition. 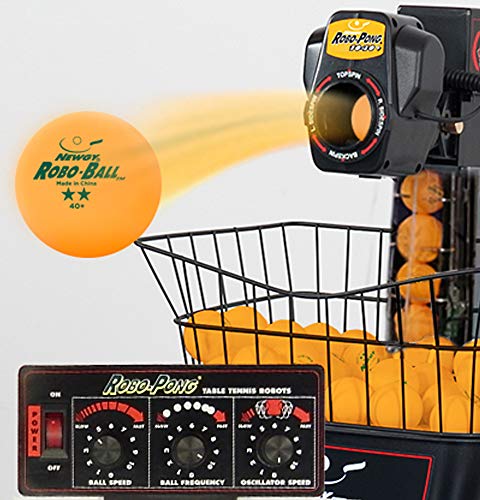 With a lower capacity than the Chaofan but a higher price tag, the Newgy Robo Pong is the machine for the player who doesn’t want to pay out the H2W but is happier to pay a little more for their ping pong robot than aforementioned Chaofan.

The Newgy is another fully controllable analog machine that allows you to gradually, as your game picks up pace and gets better, alter the intensity, speed, and delivery at which it fires its balls. An intermediary machine that has one foot in the best of both worlds inhabited by the preceding robots on this list, the RoboPong 1040 is a diligent taskmaster that keeps you focused entirely on your game.

Looks aren’t everything and while it isn’t the sexiest model available, the Robo-Pong is the perfect playing partner that allows your ping pong game to develop at a pace that you’re comfortable and happy with. Which is exactly what you want from a ping pong robot. To learn, develop, and get better at the game you love in your own time. 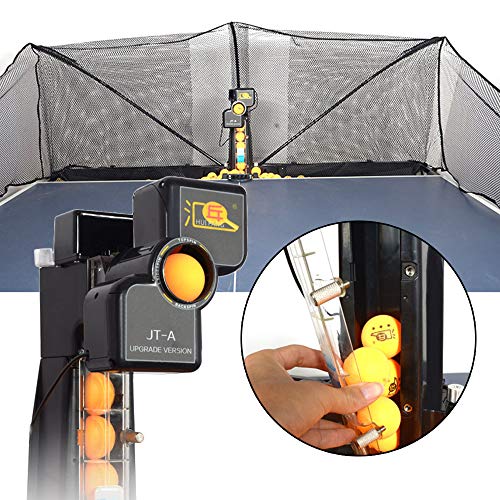 One of the big boys of the ping pong robot world, the Zxmoto is a rapid-fire monster of a machine that stands tall and makes sure you only play it on one setting; your absolute best.

With a high ball capacity and its own catch net, this analog robot allows you to control your game and keep it a speed that suits you. Easy to load, it’s a faster machine that’ll challenge beginners and long time players alike.

The extra cable length of the controller makes it easier to tailor your game to your needs without interrupting the flow of your training session. With the controller in easy reach, you can push your self harder or ease up on the ping pong throttle with the push of a button.

And price-wise, it fits right in the middle of our second and third choices on the robot list, and you know what they say about being middle, don’t you? We don’t remember exactly what it is either, but we do know that it’s something about being just right. And that’’s exactly what the Zxmoto is. It’s just right. 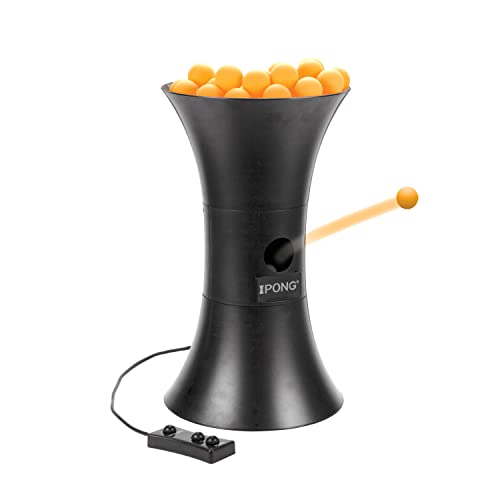 Last, but not least, it’s our pick the ping pong robot bunch, the iPong Original Table Tennis Trainer Robot. Designed to push you to your limits and beyond, the iPong proves that good things really do come in small packages.

Don’t be deceived by its size though, with one hundred and ten ball capacity and remotely controlled speed and oscillation settings, the iPong is the original table tennis robotic wolf in sheep’s clothing.

Aimed at all levels of players, the iPong is infamous for helping beginners to quickly step up to the next level of the game and making sure that professionals keep their skill set sharp and tight. And it does all of that at a fraction of the cost of its rivals.

Before buying a ping pong robot, it’s a good idea to know what it is that they do and some of the terminology used to describe their operation.

A ping pong robot is a machine that allows a person to improve their ping pong, or table tennis, game without the need for another player.

Fully controllable, they can change the direction, frequency, speed, and placement of the balls that they fire and while most rely on the input of the player, some come with pre-programmed drills and routines which can be used to improve a players game.

Frequency: This is the number of balls that the robot fires at the player in a minute. It’s usually between eighty and one hundred, but can be altered and changed by the player.

Speed: Fairly self-explanatory this is the speed that the robot fires the balls at the player. Again, it’s fully controllable according to the player’s preference.

Placement: This is the point on the table that the robot will aim, and fire, a ball at. Again, with most robots, it can be altered by the player.

Direction: The direction in which the robot will shoot the ball.

Spin / Oscillation:  This determines the amount of spin that the robot places in each ball. Some robots can also control the spin type (backspin, topspin or sidespin) of the ball.

Can A Ping Pong Robot Help Me To Improve My Game?

The short answer? Yes. The long answer? Absolutely. At the very least they can help to better hand and eye coordination, accuracy, and the speed and power of at which you can return volleys and individual shots.

Which Ping Pong Robot Is Right For Me?

Are you looking to improve your overall game, a specific part of your skillset, or just to get some practice in and knock some of the rust off of your underused ping pong muscles? Whatever you’re looking for a robot to help you achieve or do, there’s one on this list that’ll fulfill all of your objectives and aims. You just need to know what they are and what it is you want from a ping pong robot. And as soon as you do, it’s game, set and match-point...

STIGA Titan Review: Affordable but Should You Buy It?