The Black Widow series from Hammer Bowling is rightly known for how hard-hitting they are, and with each new iteration they only seem to be getting better. Today we’ll be talking about the Hammer Black Widow Legend, and in great detail. We’ll be covering this ball from every possible angle, considering its features and specs, its versatility, and other aspects that set it apart from your standard bowling ball. If that all sounds good to you, then you should read on.

We won’t bury the lede too far here, if you’re a fan of the Hammer Black Widow range and are wondering if the Legend lives up to them, then you shouldn’t be disappointed. We’d even say that it’s a step up in some respects, particularly the hitting power which is impressive in a series of balls already known for being heavy hitters.

The word that comes to mind when trying to summarize the Hammer Black Widow Legend is momentum. The core of the ball’s performance comes from the force with which it breezes through the front end of the lane, reaching the back end with ease and even all the way to the back wall.

A ball like this, that can play with momentum, makes for a good sledgehammer ball when you need one, but it can also be extremely versatile when used with the right technique. It can also maintain that performance on a series of surfaces and oil patterns, which is also handy. That said, the Legend isn’t as capable on dry surfaces as previous Hammer Black Widow balls. It isn’t bad here by any means, and we’d even say that the hard-hitting benefits you get out of this ball outweigh a reduced performance on drier bowling surfaces.

Whilst we’ll get into more detail further below, the one feature that puts the Hammer Black Widow Legend above and beyond similar balls is its carbon fiber shell. Everyone knows the durable properties of carbon fiber, and the inclusion of this shell adds a lot of strength to the ball that you didn’t have with the original Hammer Black Widow balls. This translates into what can only be described as explosiveness, hitting the pin deck with such force that it sends the pins all over the place, maximizing the chance to knock down more pins in a chain reaction. 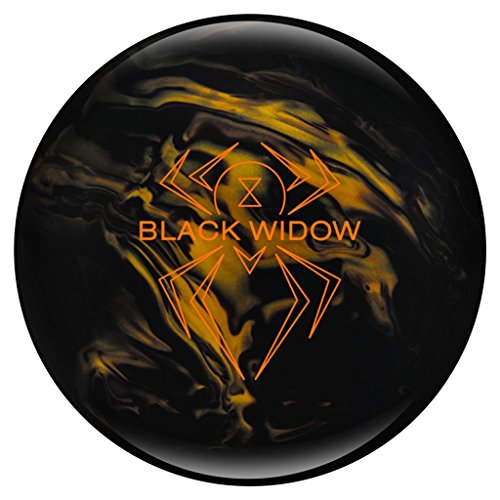 Now that we’ve given you a sense of what we feel about the Hammer Black Widow Legend, we’ll go through individual features so you can see the full scope of what these balls can offer you.

Read ->  The A-Z of Bowling Lingo and Terminology

Let’s start at the outside, at the first thing you see when you look upon the Hammer Black Widow Legend. This is the NBT Reactive Hybrid coverstock, an exterior shell that Hammer Bowling have used before, like in their First Blood model. The fact they’re using it yet again should signal how it’s the best coverstock for the job, storing up energy during your throw for a more violent back-end performance.

Speaking of features that are endemic to Hammer Bowling’s ball models, the Black Widow Legend sees the return of the Gas Mask asymmetrical core. There are no prizes for guessing the general shape that this core takes, but you should know that the asymmetrical design is great for gaining momentum when on the move, further establishing this ball as a heavy hitter.

The ball is finished with Powerhouse Factory Finish Polish to give it an attractive sheen, and it works with a 1000 Grit finish to deliver on more traction, particularly during the initial heavily oiled lane sections at the front-end and middle. This allows the ball to breeze through those areas, saving all the kinetic energy for the pin deck in its path. It also means the ball reacts sharper than others might, so despite being an explosive powerhouse there’s also the possibility of dexterous throw planning.

See below for a shorthand list of the Hammer Black Widow Legend’s specs:

As mentioned above, the NBT Reactive Hybrid coverstock makes these bowling balls tougher than a lot of alternatives on the market. This is because the NBT Reactive Hybrid uses a carbon fiber outer shell. Carbon fiber quite rightly has the reputation of being very lightweight but also very tough, too. This toughness translates into a longer play life for your ball but it can also make cleaning it more time consuming. We’d say that’s a fair price to pay to get a reliable bowling ball.

The asymmetrical Gas Mask cores of the Hammer Black Widow Legend Bowling Balls are made from a combination of Flex-Resin and Carbon-Fiber. We’ve already been through the properties of carbon fiber, and if it’s a great toughening material then it only makes sense to incorporate it into the center of your ball. The resin, on the other hand, ensures that the ball isn’t too brittle or tough. It still needs to be responsive after impacting the floor, bouncing and rolling in a way that’s desirable for the bowler.

We’ve separated the performance of the Hammer Black Widow Legend into four distinct categories, those being the torque, length, back end performance, and total hook.

Torque – 8: Hammer’s established Gas Mask core works wonders with the NBT Hybrid coverstock to generate the torque you need. Most typical shots will see this ball cutting up the back end, usually diagonally for maximum pin coverage.

Length – 14: Hammer balls that have a sub-4000 Abralon surface are always going to go the extra distance, so it’s no surprise that the Black Widow Legend, with a 1000 Abralon and polish finish, makes these balls useable with virtually any bowling lane from the moment you fish it out of its box.

Back End Performance – 19: As mentioned, the big draw of the Hammer Black Widow Legend is the massive impact at the end of the lane. The ball is engineered to hold on to as much kinetic energy as it can before releasing it all at the finish line, so even those who don’t get as many revolutions in their thrown balls can pack a dangerous punch.

Hook Potential – 50: Providing your rev rate allows it, the Hammer Black Widow Legend is perfect for executing flawless and devastating hooks which, when combined with the stopping power of the ball, should have the pins scattering.

The main attractive quality of the Hammer Black Widow Legend is the back-end reaction that it provokes. It’s a great ball for those whose shots end with a whimper. Clearing the first half of the lane with ease, it only picks up more and more energy before colliding with the pins, ensuring that a strike is always a possibility with these balls. If you’ve had experience with and enjoyed the Hammer Black Widow, then this is the option for you since it's essentially an even more powerful version.

Whilst being a very aggressive ball, it also maintains a decent lane length as rated above. No matter the oil situation at your favorite bowling alley, you shouldn’t have a problem getting this ball to the end of the lane. Even when it starts to get angular, it still feels very smooth and controlled in the way it glides, and then thunders, towards your target.

Speaking of the oil situation, these balls are ideal when used with medium to medium-heavy conditions. This is quite versatile whilst still allowing for the aggressive strike at those pins, which will hopefully net you your own strikes as you get more familiar with the ball and its devastating back-end capabilities.

The energy-storing capabilities of the Hammer Black Widow Legend work well with its carbon fiber shell, allowing for some great pin trajectories where you can guarantee a full pin wipe by flanking the all-important one to two/three pockets.

So, we’ve talked about the better qualities of the Hammer Black Widow Legend for a while, but what about the things that could be better? There are a few. First, it should be noted that the ball, whilst able to handle drier conditions to a point, will suffer from coverstock damage if it’s played in a dry lane, particularly if by a high-rev bowler. It’s built to be durable in a specific context and, when taken out of that context, it’s prone to getting damaged.

Another criticism, though less of a mechanical one and more of a theoretical one, is that the Hammer Black Widow Legend is set in its ways. It benefits from a wide knowledge of high-impact back end play and is built to do just that, but this means it lacks some creativity in the angles you can pull off. Where some of the more agile bowling balls could be described as a scalpel, the Black Widow Legend, as well as many other balls by Hammer Bowling, are best described as, well, hammers.

The Black Widow series has come far as of the Hammer Black Widow Legend. There are some minor but valid criticisms that can be levied against it, sure, but most of them depend on using the Black Widow Legend for purposes which it wasn’t intended. It’s a heavy-hitter, and anyone who sees value in that will find exactly what they’re looking for in its devastating back-end plays. Classic Hammer hitting power blends with an upgraded lane continuation to create another ball worthy of the Black Widow name.