Ice hockey is an American institution. It may have started life elsewhere, but it’s now part of the national psyche. As American as apple pie, hamburgers, and Hershey, ice hockey is the muscle car of the sporting world. It’s all about speed, precision, and power.

Played on an ice (the clue is in the name) rink, hockey, as it’s known in Europe and Canada, is a game in which two opposing teams of six players each try to score as many goals as possible in order to secure victory.

Incredibly physical, ice hockey is famous the world over for the violent confrontations that often occur during a match, and almost as well known for fighting as the skill, determination, and dedication of its skaters.

After beginning to find, and establish, an audience and fanbase in the nineteen sixties, ice hockey became a cultural phenomenon in the early eighties following the 1980 Winter Olympics in Lake Placid.

Often referred to as the ‘miracle on ice’, as the Olympics drew to a  close, the US ice hockey team beat the USSR to become gold medalists and world champions. That was the moment that put ice hockey on the map and led to it becoming almost as popular as the holy triumvirate. Baseball, football, and basketball.

With its popularity in the ascendancy, it was only a matter of time until the spectators began searching for a way to play ice hockey at home. But if you can’t skate and you don’t have an ice rink in the back garden, trying to hold home-based hockey games can be at best problematic and at worst, impossible.

It’s around this point that one of these desperate fans figured out that air hockey, the classic arcade based table game, was just a thinly disguised two-player version of the ice-based version. Word of mouth is a powerful social tool, and in less time than it took Wayne Gretzky to score a hat trick, air hockey followed it’s ice-bound cousins lead and found its own variety of fame. Invented by a bunch of bored Brunswick Billiards employees during the opening years of the nineteen seventies, air hockey is a two-player game that utilizes a frictionless surface board in which the participants attempt to score points using stickers or paddles to guide a puck into their opponent’s goal.  It’s a simple game that takes a lifetime to master.

It wasn’t long before the arcade version started to find its way into the homes of the hockey faithful and when it did, air hockey slowly started to evolve beyond its humble origins. As the game became faster, the tables it was played on began to change. They became sleeker and more advanced to accommodate the rapidly changing game.  Air hockey had arrived and it was here to stay.

Founded by Bill Rasmussen after his dismissal from the New England Whalers, sports broadcaster ESPN has ice hockey in its DNA. When it comes to all things hockey-related, ESPN has got your back. They’re the enforcer that’ll happily spend half a game in the penalty box to make sure that you score and keep on scoring. ESPN knows hockey like you know the back of your hand.

That’s why we’ve come up with a list of five of the best to help you decide which ESPN air hockey table is the right one for you. Grab your stick, it’s game time… 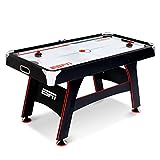 Hockey is a tough game and tables don’t come much tougher than this steel legged ESPN monster. As hardy as the players who hit the ice, this table doesn’t have any unnecessary bits and pieces so there’s less to break down which only adds to its durability and reliability.

Designed with precision in mind and easy to put together, this all-steel table also features a laminated surface, or as it’s known in air hockey circles, playing field.

And the holes that litter that playing field to let the air-flow through them are evenly located so that you don’t have to worry about anything  and can just keep on playing.

And the electronic scorecard will keep you focused on the game and your opponent as it records the goals and time so that you don’t have to.

This is the table for the air hockey fan who wants a little more bang, and variety, for their buck. When you’re tired of air hockey (which will probably never happen, but like Sean Connery you should never say never), this table has got you covered.

It comes with a complete table tennis conversion that’s easily fitted when (and if) you ever feel like a change of sporting scenery.

As for the hockey table, it features a heavy-duty air pump and fan and built-in electronic scorer that takes care of everything so that you can concentrate on what’s important.  Playing hockey.

And it also comes with everything that you need to play both - the paddles, the discs, the bats and the balls. As soon as you’ve put it together, you can start playing hockey. And tennis. If you like that sort of thing, 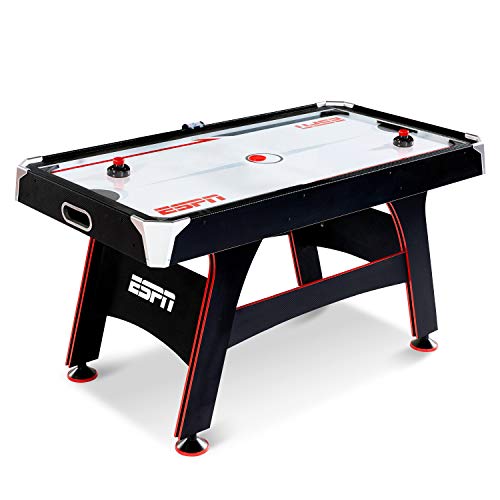 If you’re tied by your budget, and most of us are these days, this Premium Compact table is the solution to your fiduciary means versus air hockey necessity problems. At around two hundred and fifty dollars, it’s a means-tested table that won’t you need to make sacrifices for.

Read ->  How To Clean Your Air Hockey Table

Don’t believe everything that you read on the internet, size isn’t an issue. At least it isn’t as far as this table is concerned. At five foot, it’s compact enough to fit in most apartments. You don’t need a utility room or a man cave to play air hockey. You just need this table.

Just because it’s smaller, it doesn’t mean that this table doesn’t do everything that its full-size competition does. It does. Sidebar LED scorers and timers and a pretty powerful fan mean you’ll have just as much hockey fun with this table as you would with a much bigger model.

Looking like it came straight off the set of ‘Tron’, this black and silver behemoth is not only aesthetically pleasing, thanks to its overhead scoring system, crisp and ridiculously sharp sound effects, and frictionless playing field, it’s also incredibly addictive. Once you start playing on it, you won’t be able to stop.

The famed ESPN muscular air pump and fan keep the table running at a speed that’ll keep the most ardent air hockey devotee on his or her toes. Fire this table up and you’ll spend endless hours trying to keep up with whoever you’re facing.

Its overhead scoring bar makes keeping track of your victories easier than it’s ever been and it’s location means that you don’t have to strain your back trying to see how many goals you’re up by in the middle of the game.

Built of steel, this table is harder to hurt than Gordie Howe and it’ll have a playing career that’ll rival that of the infamous Red Wings ice warrior.

We’ve saved the best for last. This Premium Touch Screen table is the big enchilada of ESPN’s air hockey range.  It’s touch screen scoring system allows you to jump straight into any game with minimal set-up time and even less fuss.

Fully equipped with the usual monstrous ESPN 120 volt air pump and fan and beautifully smooth playing field this premium table will keep the puck in play for hours. The only problem you’ll have to worry about is trying to keep up with it.

A seven and half foot colossus, this table will instantly become the centerpiece of any room that it calls home. It takes up a lot of room, but that’s a small price to pay for something this beautiful.

While none of the tables on this list are what you’d call small, some are bigger than others. Measure whatever space you have twice, because you’ll only be buying once. Size is important, it matters.

Make sure you have the space for whichever table on the list it is that you want. If you don’t, choose again. Second choice is better than no choice. And no air hockey table

What kind of air hockey player are you?  A serious devotee of the game who wants to spend all of his or her free time hunched over a table grinding your friends into dust with victory after victory?

Or a more casual, take it as it comes type who might squeeze a game in every now and then? Does your table have to have all the bells and whistles that it’s possible for it to have or will a standard table fill that air hockey sized hole in your life?

Can I Put It Together?

Well, can you? Can you assemble your potential table or do you know someone who can? What level of difficulty are you happy to deal with when it comes to said assembly?

It might seem a  trivial question to ask yourself, even a little silly, but as we’ve pointed out, size matters and the small things are important. After all, you don’t want anything to spoil your enjoyment of your air hockey table do you?

Set your budget and stick to it. Decide what you want, and need, from a table and spend that and not a penny more. There’s an ESPN air hockey table for every player and one designed to suit every budget. You don’t have to break the bank to have fun. Choose your table and drop the puck. It’s face-off time…